In a new report from blockchain analytics platform Blockdata, the firm looks at what exactly it would take for Bitcoin to surpass Mastercard and Visa, two giants with a near duopoloy on global payments.

Mastercard’s network processed $1.8 trillion per quarter this year, while Visa processed an average of $3.2 trillion, or 260% and 540% more respectively. 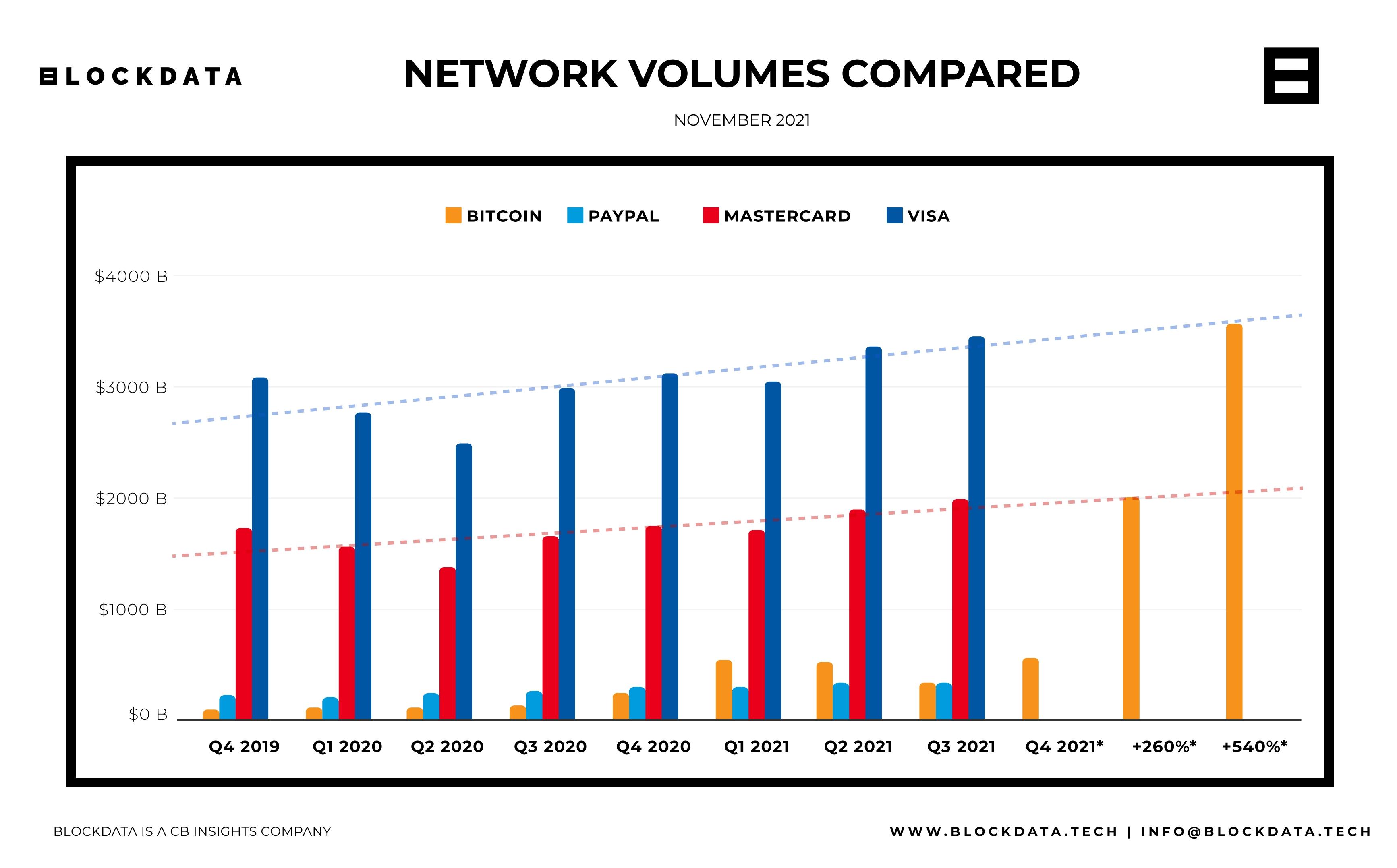 “It’s impressive how Bitcoin, as a 12 year old decentralized network, is 27% of the way in terms of one metric (volume processed) compared to Mastercard, a company founded in 1966. Especially when you take into account that this is a decentralized movement.”

Blockdata says there are three main factors that would make the Bitcoin network rival that of Mastercard and Visa.

Regarding the first factor, the firm says that there are many variables to take into account, such as the fact that the Bitcoin network currently only handles a limited amount of transactions. Once the network reaches capacity, it would be up to Layer 2 solutions like the Lightning Network to handle.

“In fact, it is unlikely we’ll ever know exactly how many bitcoin transactions happen over the Lightning Network, as there is no way for anyone to monitor all of the traffic on this network. That in turn leads to the conclusion that it’s unlikely we’ll have an accurate answer of when Bitcoin grows to such a network size, only estimations.”

The firm says that theoretically, if the amount of value transferred per transaction increased by 260%, then Bitcoin would be processing an equal amount to Mastercard on a daily basis. To match Visa, it would have to increase by 540%. However, Blockdata says that there is no hard data indicating an upward trend in the average amount of value transferred with Bitcoin.

Looking at the third catalyst, Blockdata says that if the price of Bitcoin went up by 260%, to $245,000, then its network would theoretically be processing as much volume as Mastercard. To match Visa, it would need to rise by 540% to roughly $435,000. Hypothetically, if Bitcoin were to continue growing at the same rate it did this year, which is likely unrealistic, Bitcoin could surpass Mastercard by 2026. 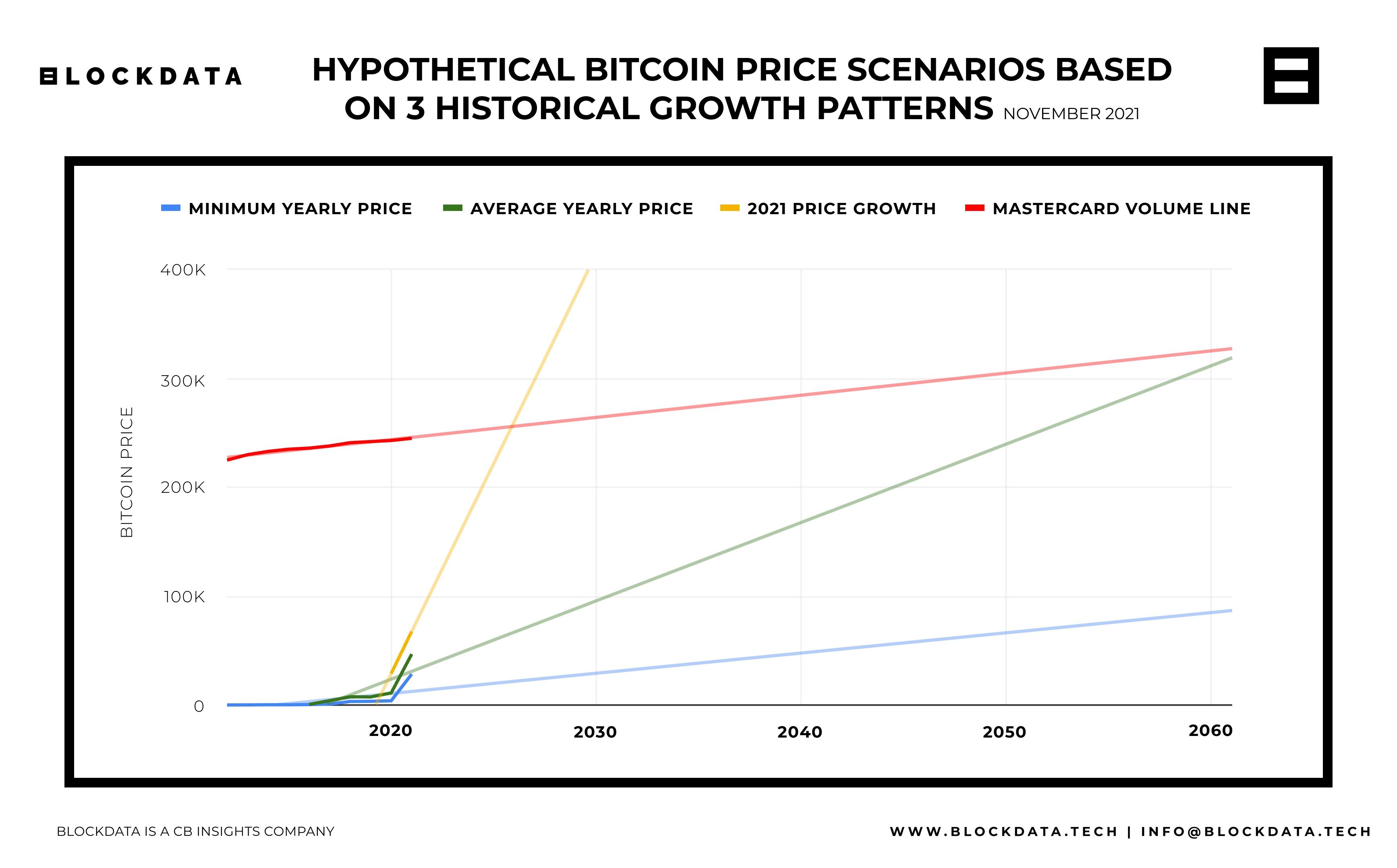 Blockdata doesn’t give an exact timeline for when Bitcoin ultimately overtakes the other payment giants of the world, but does say that fears of inflation, which are rampant worldwide, could end up being a massive catalyst for the top crypto.

“If people in developed countries with easier access to cryptocurrency continue to move an increasing amount of wealth into it, a lot can change over the next years, and a conservative estimate of 2026 for Bitcoin to grow to the scale of a network like Mastercard or Visa, may not be so overoptimistic after all. Facilitating the same number of users and transactions however, is a completely different discussion and an enormous challenge.”

Previous Post Previous Want a Job in Crypto? Might be a Good idea. Let us Help!
Next Post Next Invesco Set to Launch Spot Bitcoin ETP In Europe