Bloomberg senior commodity strategist Mike McGlone thinks that the US and China are in the middle of a cold war with cryptocurrency at the center of it all.

Speaking in an interview on the GoldSilverBitcoin Show, McGlone says there’s an impetus on the US to embrace crypto to get a leg up on its economic rivals. Noting that China’s trend of relatively authoritarian measures has spread to the crypto industry, McGlone says that over a billion people without access to digital assets could be a big opportunity for the US.

To me, this is a classic case of a pretty significant cold war developing centered in cryptos.”

Because of China’s decision not to adopt crypto, the strategist predicts that we’ll all look back at 2021 as “potentially the beginning of the end of the Chinese economy,” and the point where the country reached its peak while the US accelerated.

“Every day that Bitcoin and Etheruem go up, its everyday pressure on the Chinese communist party, and there’s a lot of despondent citizens in China who are not being allowed to partake in this.”

McGlone says that Bitcoin, Ethereum, and crypto-based dollars are the “three musketeers” driving the markets to higher valuations, and stresses the significance of the USD being the main settlement layer thus far in the space’s development. 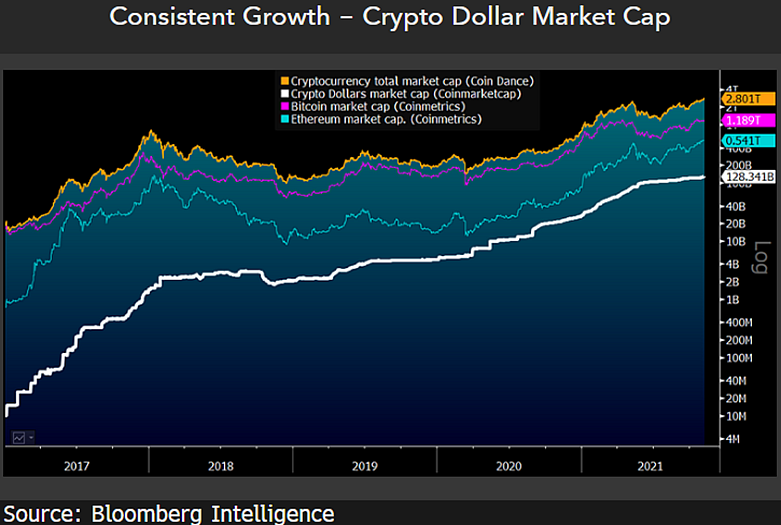 “Three Crypto Musketeers Driving $3 Trillion Market Cap – Representing a better way to transact, a strengthening ecosystem and here-to-stay asset class, #cryptodollars are the most significant advancing part of the digital-money revolution and the third leg of the crypto stool.”

The finance veteran ultimately sees Bitcoin as being in the development phase of becoming a hedge against inflation superior to gold.

“People say it’s an inflation hedge. Yeah, someday it will be, but right now it’s in that price discovery, stage, and that’s the big difference. And its in the process of replacing gold in portfolios.”