One “what-if” scenario making the rounds in the cryptoverse is the possibility of Bitcoin following in the footsteps of gold in the 1970s. The idea stems from the growing perception that Bitcoin is in fact “digital gold,” serving the functions that the yellow metal once did but in a more efficient manner, such as with accountability, fungibility, and ease-of transfer.

“People have always sought assets that were not controlled by governments. Gold has had this role for centuries. And yes, I could potentially see Bitcoin to become the 21st century digital gold.”

If Bitcoin is in the process of replacing gold, one could posit that it would do so right now or in the coming months and years, under the narrative of excessive money printing and looming inflation, much like how gold went parabolic in the 70s in a similar climate.

Jurrien Timmer, director of global macro at Fidelity Investments, has been one analyst who has considered the Bitcoin-to-gold comparison. Based on it, he said BTC’s recent rally doesn’t yet seem overbought.

“In terms of price momentum, Bitcoin’s move doesn’t seem excessive. Below, the bitcoin/gold ratio along with its de-trended Bollinger Bands, measuring the number of standard deviations from its trend.” 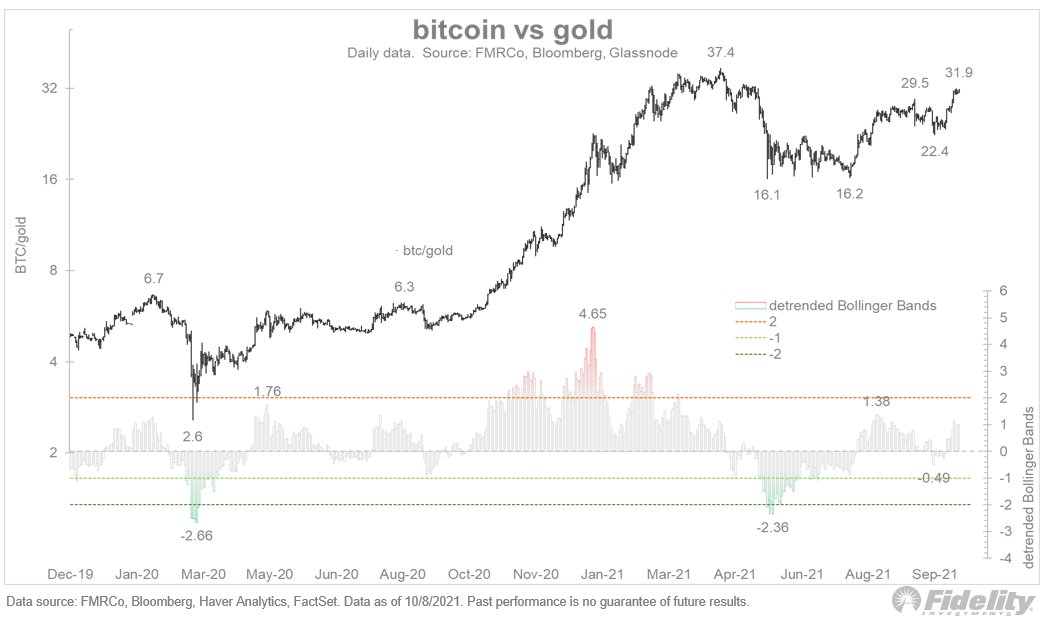 In August, while admitting that the comparison may still be highly subjective, Timmer made a forecast based on the BTC vs. gold model that has so far been accurate.

“Based on my (highly subjective) gold analog from the 1970s, bitcoin looks ready to resume its up-trend.” 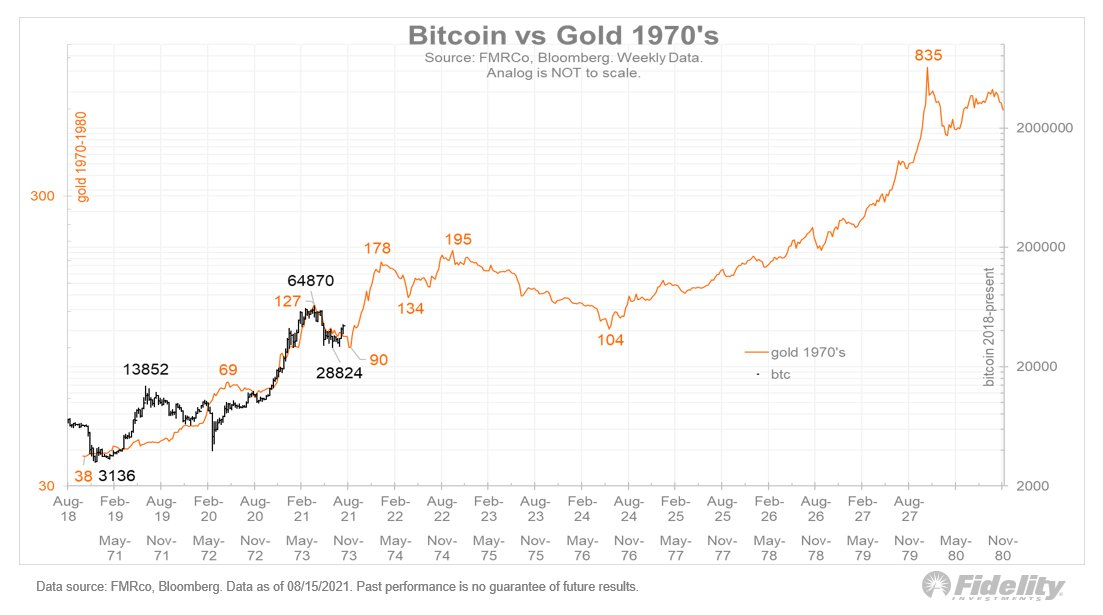 Timmer’s chart suggests that Bitcoin tops out somewhere in the vicinity of $200,000 this market cycle before stagnating for a few years. Following gold’s trajectory, it would then blast off into the seven figure range in the latter half of the 2020s.

Outside the institutional world, analysts like pseudonymous TechDev are also open to the idea of Bitcoin following gold. Switching up the timelines slightly, TechDev creates a variation of the comparison while also including Bitcoin’s 2017 bull cycle. All three price trajectories are so far interestingly similar, even if highly subjective.

Remarkably, they take #Bitcoin to roughly the same price.

Gold just gets there 1 month later.

Which is it gonna be?” 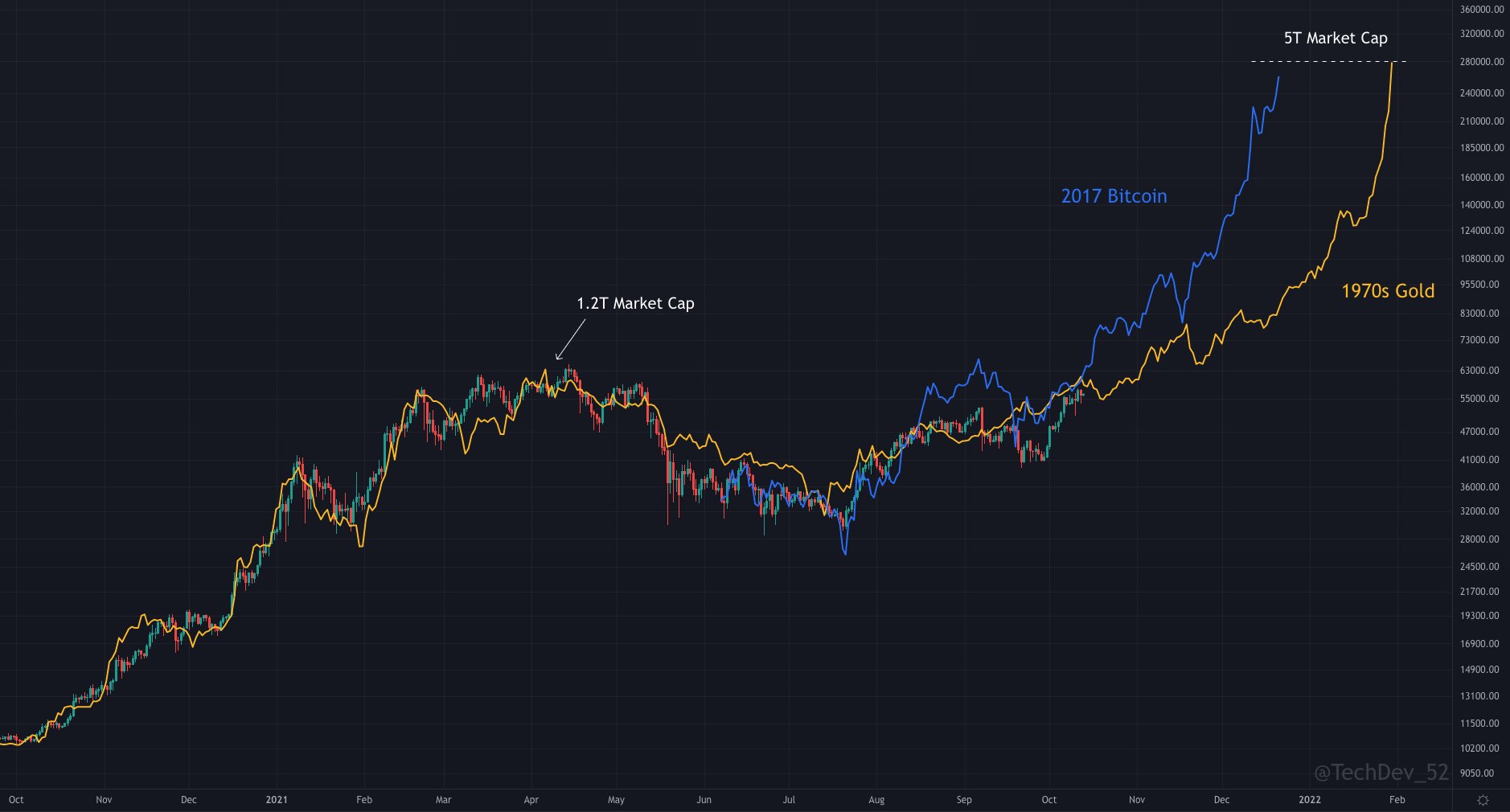 TechDev is calling for a market cycle top for Bitcoin somewhere between $150,000 and $250,000. Fidelity’s Timmer says while he’s not in the business of making bold predictions, his models converge for an average of $109,000 in 2023 or 2024, when most believe BTC will be in a bear market based on the 4-year cycle theory.

“So is bitcoin on its way to new highs? I know better than to make bold price projections but I will note that the next (and last) time my supply-and-demand models intersect is at around $100k in 2023 or 2024.” 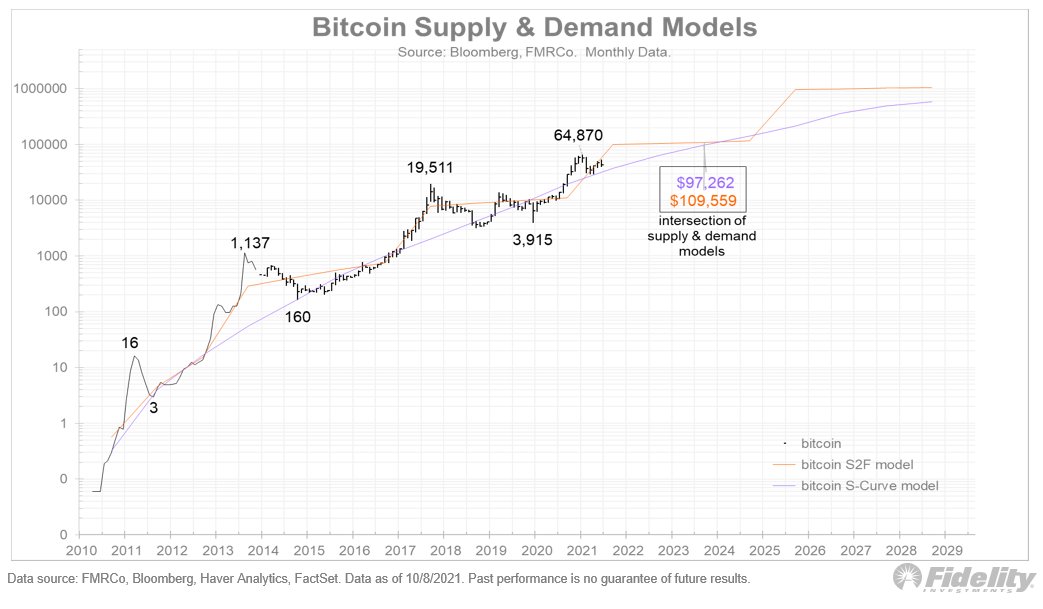