Bitcoin has reached an inflection point where many traders are debating whether or not BTC is still in a bull run.

A crypto analyst by the name of Michael Schmidt has proposed the idea of looking at Bitcoin bull cycles measured in terms of blocks, rather than real-world time.

According to Schmidt’s whitepaper on block-based Bitcoin cycles”

“The problem with using datetime, aka regular human time, to make price predictions on direction of price action and overall market direction (bull vs bear market) is that the datetime is completely disassociated from anything the Bitcoin network actually cares about such as difficulty, bitcoin issuance etc. When price is placed on a block-based X axis, the patterns of the price action become easier to see.”

Using Bitcoin’s blocks to map out what’s next, Schmidt proposes a cycle top for BTC sometime between March 7 and April 7, though that time window can vary due to the fluctuation of block speed.

And unlike many analysts, Schmidt doesn’t believe Bitcoin is mature enough that investors can assume diminishing returns are to be expected. According to the analyst’s model, BTC can go anywhere from $302,000 to $633,000 this cycle, with an average price of around $441,000.

Other analysts like TechDev don’t have a particular timeline or hard price target in mind. Instead, he’s waiting for a technical confirmation to play out. In his case, it’s a two-week close above the cycle’s 1.618 Fibonacci level.

“After more research, I’ve come to believe this next (possibly final) impulse will come after a 2W close over the cycle 1.618, as they always have.

If this happens, it may provide a timeline estimate, but it honestly does not matter, and I don’t plan to focus on it.” 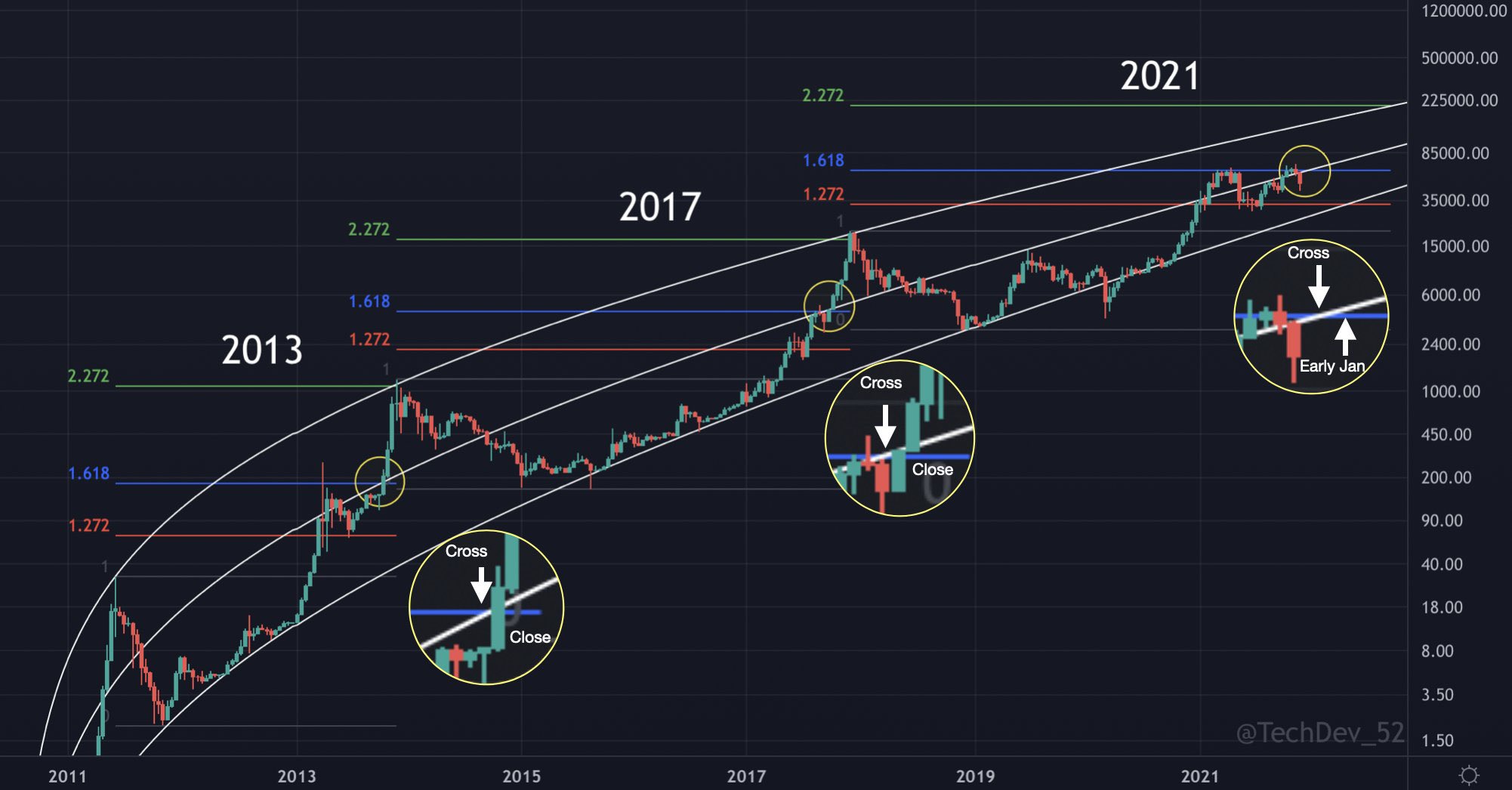 The more conservative Bitcoin predictions for 2022 are somewhere along the lines of $100,000 “at some point.” Antoni Trenchev, co-founder of lending platform Nexo, is calling for six-figure Bitcoin some time before the summer on the back of institutional adoption and corporate treasury allocation.

“Every time investors in the broader community write off Bitocin, it outperforms significantly. This has been the case in 2020 when it rallied close to a thousand percent last year, on top of that it rallied another 63%. I’m quite bullish on Bitcoin. I think it’s going to reach $100,000 this year, probably by the middle of it.”