Bitcoin officially broke all-time highs on Wednesday after a grueling six-month bear market that trimmed over 55% off the world’s leading cryptocurrency.

Reaching the $60,000 level again and then a new all-time high above $66,000 has signaled to the crypto markets that the bull run is “officially” back on, with much of the altcoin sector also starting to heat up.

At the time of writing, the total cryptocurrency market capitalization is sitting at $2.66 trillion, after hitting a high of $2.7 trillion during Bitcoin’s price spike. With Bitcoin essentially on a parabolic move since $40,000, traders and analysts are now determining where the next targets are, and whether or not a dip is needed.

Looking at a more macro level, Bitcoin analytics firm Ecoinometrics confirms that the current state of the market has zero resemblance to previous bear markets or market tops.

“In case you had any doubt, this is not what a cyclical bear market looks like.

For each of the previous cycles, the top was marked by a massive parabolic move with less and less people accumulating around the top until it all came crashing down.

Right now the only addresses that are not accumulating coins over the past 30 days are the small fish. It looks like they have been selling the breakout. But everyone else is stacking sats.

That means when FOMO is going to kick in for the little guys Bitcoin is set to go parabolic.” Ecoinometrics interestingly suggests that Bitcoin has reached a point where its extremely wealthy holders are starting to believe that BTC will never significantly go down in price, and would rather just hold on to their coins so that they can use it as collateral to keep borrowing against it.

“I think we are getting to the point where Bitcoin as a store of value asset is about to be adopted as a pristine collateral. Which means if you are hodling a large enough proportion of the Bitcoin supply you’ll be able to live a comfortable life by borrowing against it without ever having to sell.

If that theory proves correct, the supply shock is going to be massive and we could very well see Bitcoin flip the market size of gold in just a few years.”

Based on the firm’s risk level indicator, Bitcoin hasn’t yet reached the “overheated” level, suggesting that BTC has much more gas left in the tank.

The aggregate risk score measures whether or not the market is overheated. Blue is low risk, red is high risk.#BTC is making new ATH while the market is barely hot… this is promising.🦾 pic.twitter.com/CkMVx2ubx9

Also suggesting there’s still more room to run is PlanB, the analyst known for first applying to stock-to-flow (S2F) model to Bitcoin. He shares a relative strength index (RSI) chart for Bitcoin that incorporates the price level at each interval. It indicates that Bitcoin is perhaps just a little over half way to becoming overbought, even with new highs already in the bag. 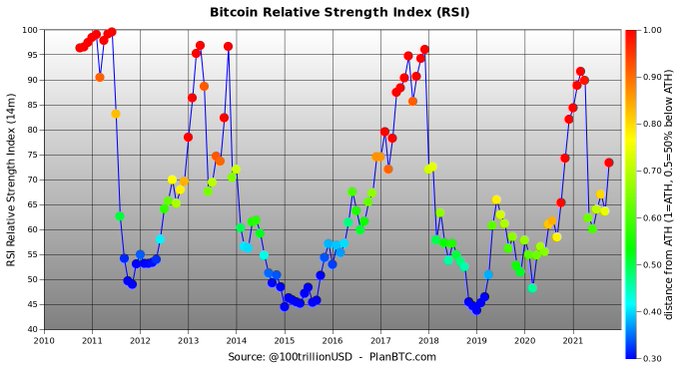 PlanB has called for a market top somewhere in the ballpark of $288,000 for BTC, a target he says is still in tact. The trader known as TechDev is also calling for a market top somewhere in that range as well, though based on his charts, he expects this to come rather in a hurry as opposed to a drawn out cycle that ends in mid 2022. He backs his bullishness up with a 10 period relative volatility index indicator (RVI).

“Yes, you should get off the 1H #BTC candles.

Be prepared for 10K swings as we go parabolic. 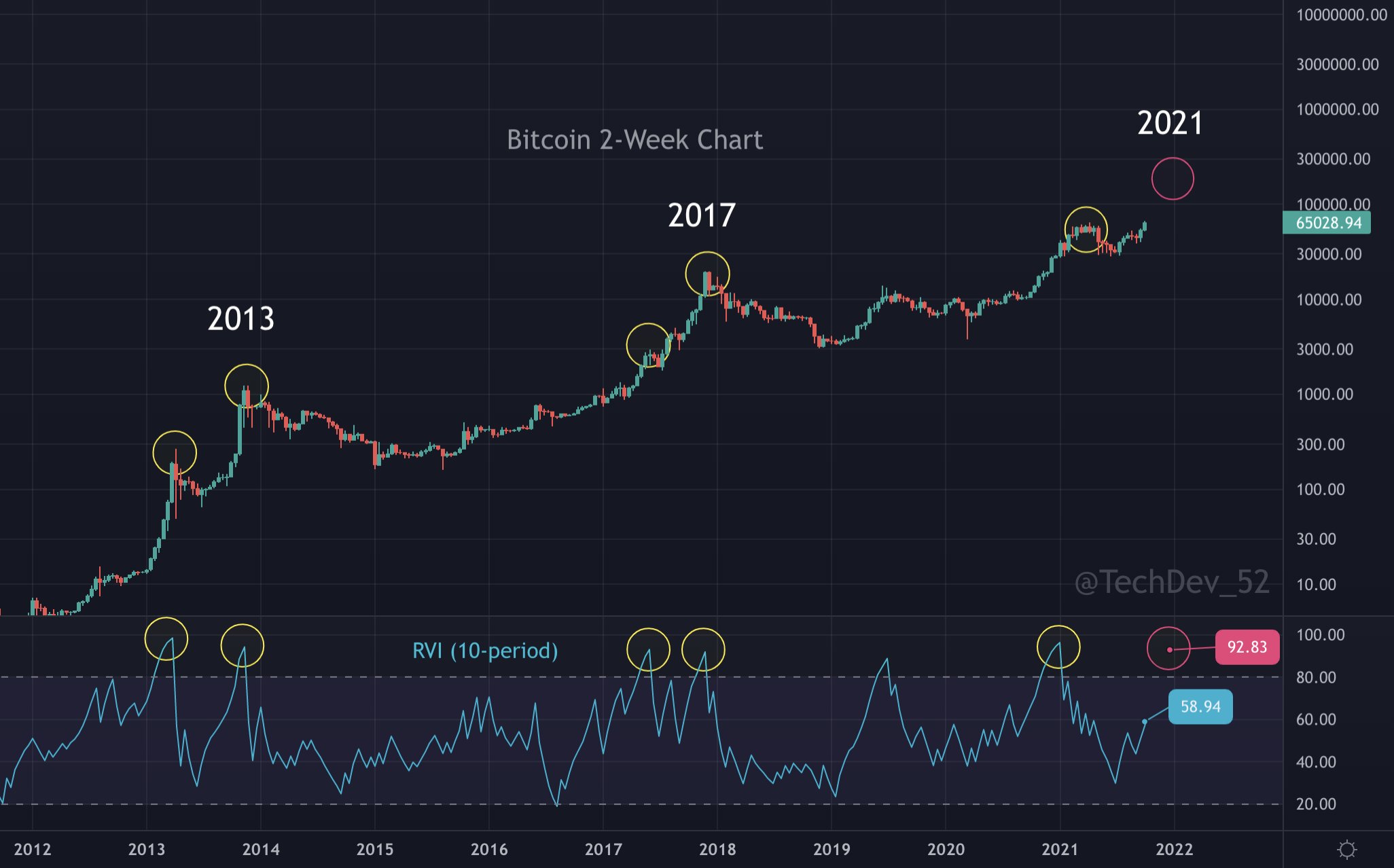 After Bitcoin hit it’s new milestone, some capital flowed into the altcoin markets as well. Many coins in the top 20, including Ethereum (ETH), Solana (SOL), Litecoin (LTC) managed to rip 15% or more in less than a day. TechDev’s chart suggests that compared to the 2017 cycle, the altcoin market is either a little bit ahead of schedule, or in a much stronger position today.

“Total altcoin market cap close to taking out its September high (and ATH).

Could signal some serious alt runs sooner than expected. Will keep close eye.

#Ethereum ain’t playin around this cycle.” 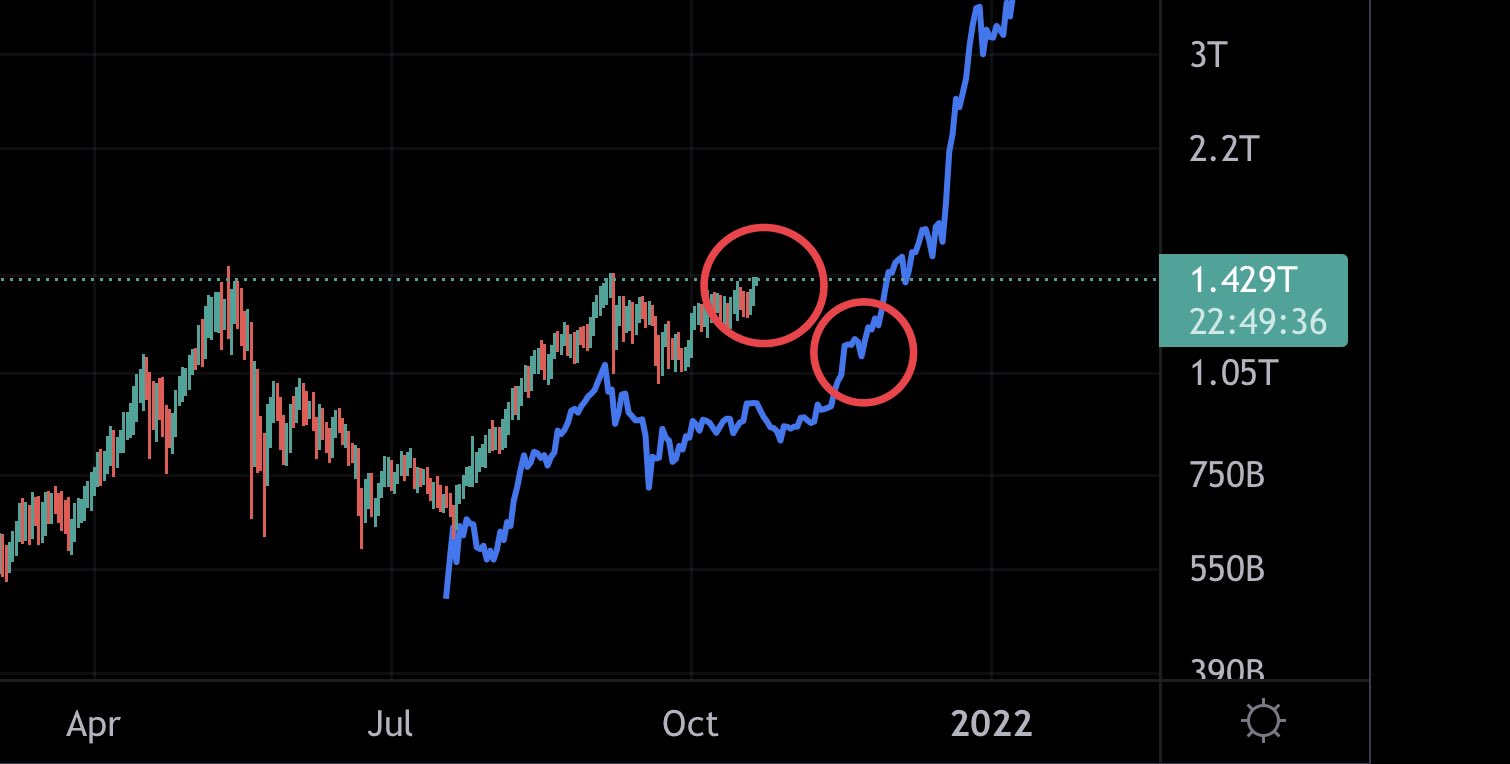